The Gamma Delta T cell: a new recruit in the fight against cancer. 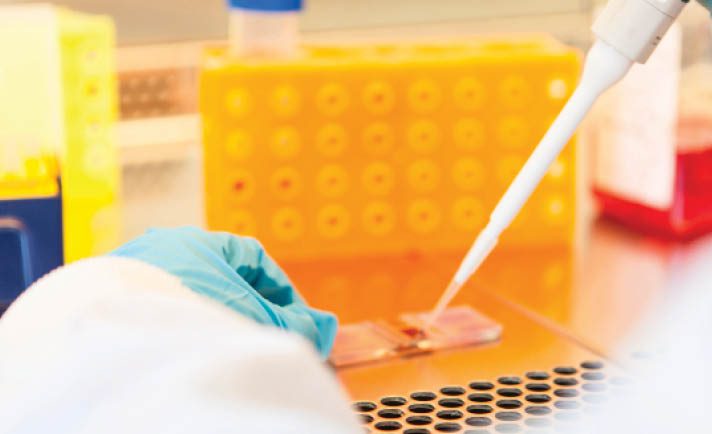 The Gamma Delta (gd) T cell is a relatively new player in the ﬁeld of immunotherapy but one we believe to be of potentially huge signiﬁcance in the ﬁght against cancer.

Before I get into why we think the gd T cell is important I need to explain a bit of immunology. The immune system can be split into two arms, the innate and the adaptive. The innate immune response is generally thought of as being a rapid response to infection whereas the adaptive response takes longer and retains a memory of the infection. The innate system recognises ‘molecular patterns’ which are present on many different bacteria and ‘stressed cells’. The adaptive response is generated against very speciﬁc molecules unique to one source and is the response targeted in conventional vaccination, leading to protection over many years.

The T cell is the cell which can kill infected cells and is also one of the most potent at killing tumour cells. To do this the T cell has a molecule on its surface which it uses to recognise targets on either an infected cell or a tumour cell. The T cell population an be broken down into two types, the Alpha Beta (ab) T cell and the gd T cell. The ab T cell recognises a small piece of a molecule and each ab T cell can only recognise one piece. This means that if we have a million million ab T cells they will recognise a million million targets, which is great when you consider that there are lots of different bacteria and cancer molecules out there that need to be identiﬁed. It also means that ﬁnding the one ab T cell to target ‘your’ cancer is a bit like looking for a needle in a haystack. The immune system is good at doing this but it can take time to produce enough of that one particular ab T cell to have an effect.

The gd T cell appears to work in a different way, it recognises the change in shape of a ‘sensor’ molecule on the surface of a target cell, a change in shape that can be caused by either bacterial infection or, in some cases, by a cell becoming a cancer cell (a transformed cell). The advantage of this recognition system is that many gd T cells can recognise the same target. In fact studies have suggested that up to 70% of the circulating gd T cells can recognise targets in this way. So even though gdT cells only make up a small proportion (approximately 5%) of the T cells circulating in the blood most of these can recognise tumour: that is quite some army!

It’s this ability of the gd T cells to respond to both bacteria and tumour that we are investigating. We have published reports that show that gd T cells can kill tumour, and that the killing of tumour can be increased by activating the gd T cells with bacteria. This is of particular importance as Prof Gus Dalgleish has for some time been advocating the use of a bacterium called Mycobacteria in cancer.

Mycobacteria species can cause diseases such as tuberculosis and leprosy and many research groups have shown that the infection of cells with Mycobacteria can cause that cell to activate the gd T cell population, which in turn can kill the infected cell. Our work at SGUL is to try and determine if a harmless Mycobacteria, such as the one used in BCG vaccination against tuberculosis, can activate responsive gd T cells which can then kill tumour cells.

We know that while some cancers, at least in the laboratory, can be killed by gd T cells, others have been shown to be resistant to killing. There is, however, a drug which has been used safely for many years to treat osteoporosis, which seems to make a resistant tumour cell susceptible to killing. This drug is called Zoledronic acid (Zometa).

So we have a cell which can kill tumour, the gd T cell; we have a way to activate these cells, Mycobacteria; and a way to make tumour cells susceptible to killing by the gd T cell, Zoledronic acid.

Our group, funded by the ICVI, has a number of projects ongoing which aim to understand, and therefore improve, the way in which these three components can be brought together to ﬁght cancer.

One project aims to identify the ‘receptor’ on the gd T cell surface which recognises the Mycobacteria and to determine if this is exactly the same as, or just similar to, the receptor which recognises tumour. This could be important in making the recognition of tumour more efﬁcient. We are collaborating with a group at Cardiff University to look in great detail at these receptors. If they are exactly the same then all is good, if there are differences then we should be able to identify which is the best and, at some point in the future, we can engineer a cell with the ‘perfect’ receptor. This is some way off but the concept has been proven with a number of similar approaches in the clinical setting. This work is the PhD project of Joe Fenn who is part funded by the ICVI and part funded by Public Health England.

One problem that we are addressing is that of how the gd T cell actually gets to the tumour. Solid tumour are generally in tissues and our gd T cells are in the blood circulation. We have a project that is looking at how gd T cells might migrate out of the blood to the site of the tumour. This exciting work has shown some very interesting preliminary results but, as always, we have to make absolutely sure of these ﬁndings.

Once the gd T cell sees the tumour and starts to kill it, is there any way in which this interaction of cells can prime the other parts of the immune response? At the beginning of this article I introduced you to the ab T cell which seems to be able to ‘remember’ targets. We have a project which aims to investigate the interaction of gd T cells with tumour and the recruitment of other cells, including the ab T cell, to join the ﬁght. This would be of particular importance for generating ‘memory’ to the tumour which would reduce the chance of a recurrence of disease. This work is currently being submitted by Emma Sparrow as her PhD thesis.

All of these approaches add to the understanding of the role of gd T cells in cancer and how we can best harness these cells for more efﬁcient immunotherapy. It is of interest that a recent report on the use of Mycobacteria in pancreatic cancer, co-authored by Gus, has shown some clinical response in a number of patients. We believe that this result might be in part due to the activation of gd T cells and proposed work will investigate the activation of these cells in a new clinical trial using Mycobacteria in melanoma.

Once again we are indebted to the ICVI for providing the funding to investigate these possibilities and for supporting the young scientists we will need to train to make cancer a thing of the past.

By Mark Bodman-Smith, Senior Lecturer in Immunology at SGUL. 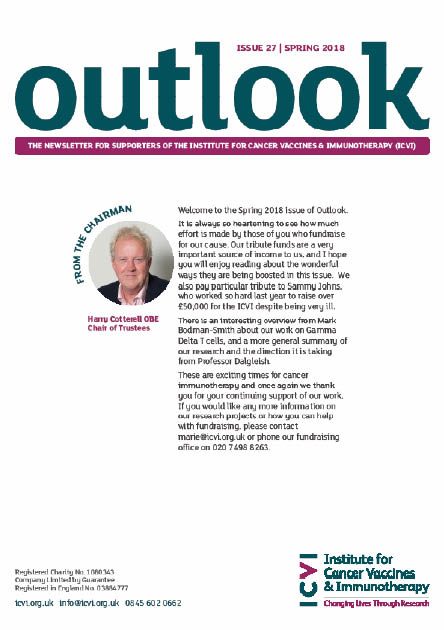